The aim of the agreement is to decrease global warming through: 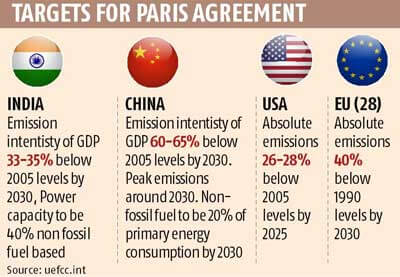 HOW DOES THE PARIS AGREEMENT WORK?

Implementation of the Paris Agreement requires economic and social transformation. This involves energy and climate policies like the Nationally Determined Contributions (NDCs) and 20/20/20 targets, namely:

The countries also aim to reduce global greenhouse gas emissions as soon as possible to achieve a climate neutral world by mid-century.

Keeping in view its development agenda, India pledges to:

SIGNIFICANCE OF THE AGREEMENT:

CRITICISM OF THE AGREEMENT:

Q. Examine critically the significance of Paris Climate agreement in addressing the threat of Climate change?