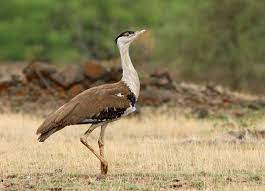 1. They are classified as critically endangered in IUCN red list.

2. They are found only in Himalayas